Meaningful progression has been a priority for the team throughout the development of Magic: Legends. Since our primary design goals revolve around the epic fantasy of being a powerful Planeswalker, we wanted to give players something uniquely different. Instead of revisiting the standard concept of customizable player housing, we focused on giving the player purposeful choices that directly impact both their characters and the way they experience the Multiverse. Last week, we introduced Realms, the feature that speaks to these goals by bringing the in-game progression systems and content together in a cohesive fashion. This week, we are going to tell you how Realms tie it all together. 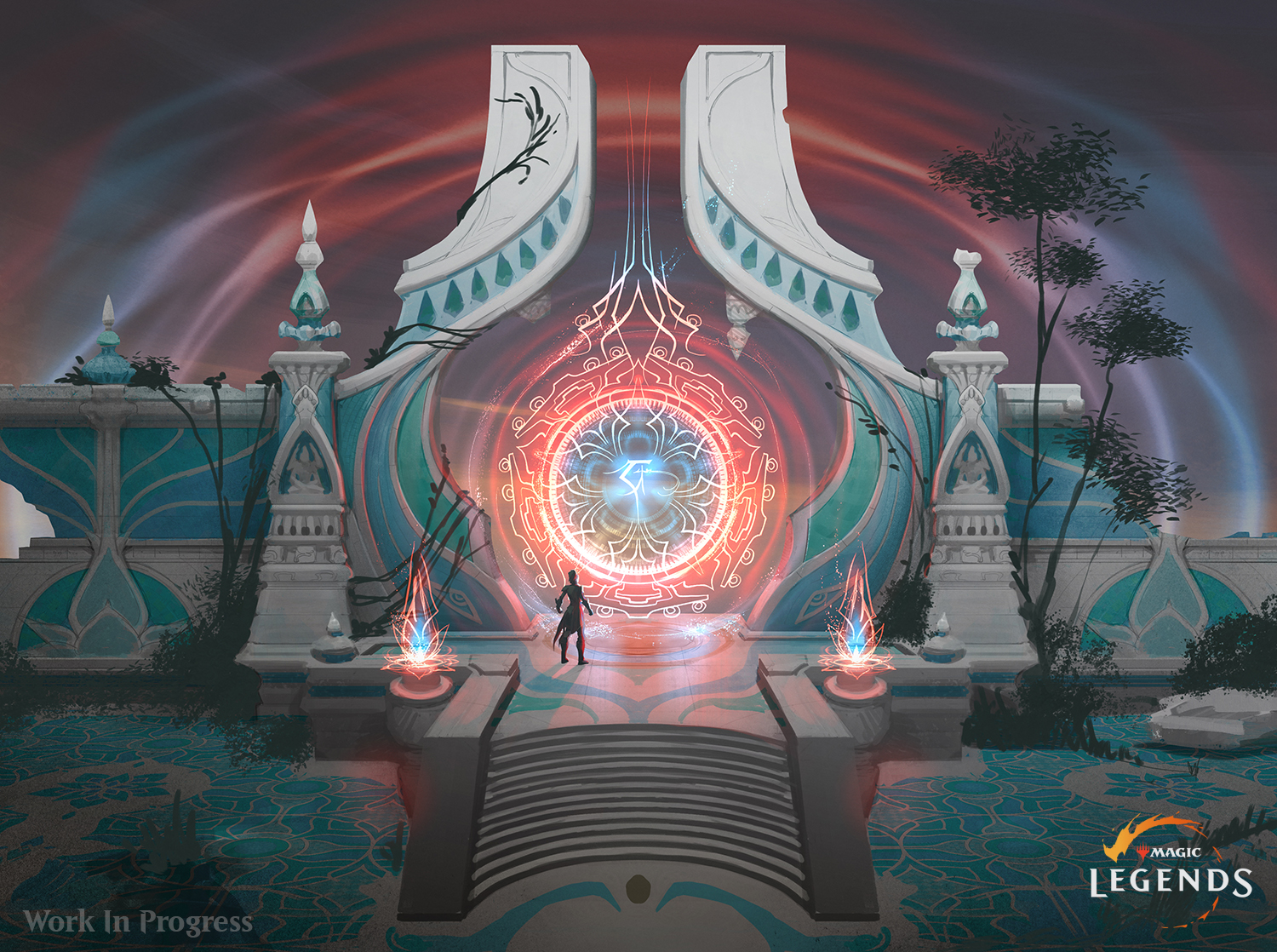 Realms capture the simplicity of popular ARPG crafting systems and blend it with the sophisticated flexibility of a skill system to provide comprehensive character advancement. Once a player unlocks their Realm, they will steadily gain access to several workstations. Each of these stations serves a unique function, but their cumulative impact places the Planeswalker power fantasy squarely in the player’s hands. As players upgrade pieces of their Realm, they gain the ability to essentially touch or, in some cases, tailor every aspect of their play experience via projects. 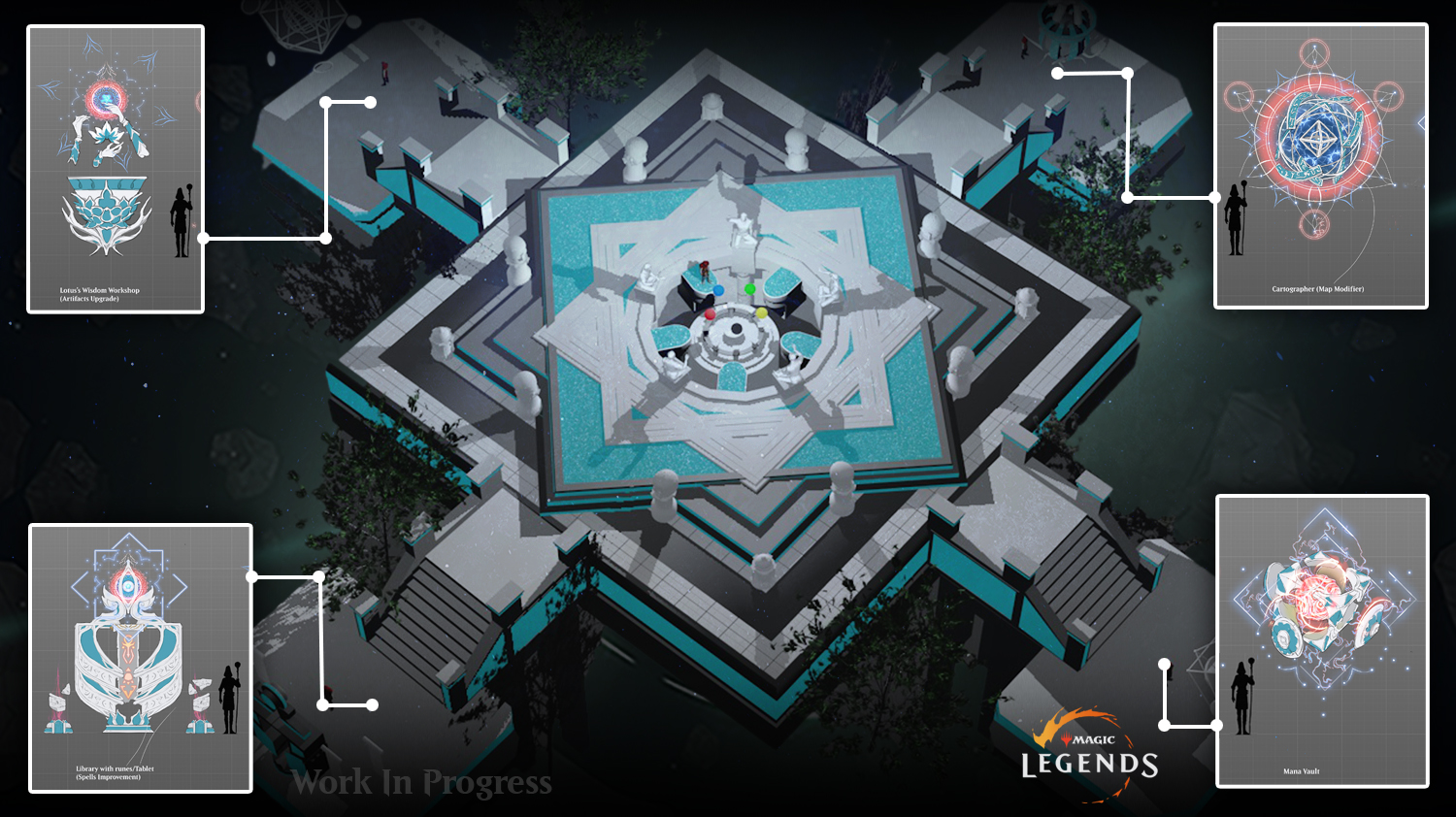 Workstations run projects at the cost of a resource called “Planar Mana”. Players earn this currency by either completing missions and ordeals or using the Mana Vault workstation. Planar Mana follow the pattern consistent with the iconic Magic color wheel, which means that players can expect to find White, Blue, Black, Red, and Green varieties during their adventures. Different projects will require different amounts and types of Planar Mana, so players will need to seek it out and acquire it accordingly.

The Aetheric Core sits central to the Realm and functions as the primary workstation. Key projects that affect the entire Realm are run via this workstation, so no other workstation can be upgraded beyond the Aetheric Core’s current level. This is the station players will use to create their lands, so investing in the Aetheric Core is key for anyone who wishes to get the most out of their Realm.

Lands differ from workstations in that they represent a Planeswalker’s overall magical strength. As players grow in power and upgrade their Realm, they will establish connections with more lands. The more lands of a specific color the player owns, the higher their reward multiplier for those specific color rewards will be. For players looking to improve their spell power quickly, investing in lands will be something worth focusing on.

The Arcane Library is where players conduct research to learn new spells or procure extra resources that can then be used to upgrade their current spells. This is where a Planeswalker can learn spells from the decks of different starting classes. For example, a player who started as a Beastcaller can use the Arcane Library to learn Telestrike from the Mind Mage’s starting deck or Seismic Grasp from the Geomancer’s starting deck. The Arcane Library also has a number of unique spells that cannot be learned elsewhere in the Multiverse. One example of this is Goblin Bombardment, a red sorcery that mimics the goblins of Shiv. 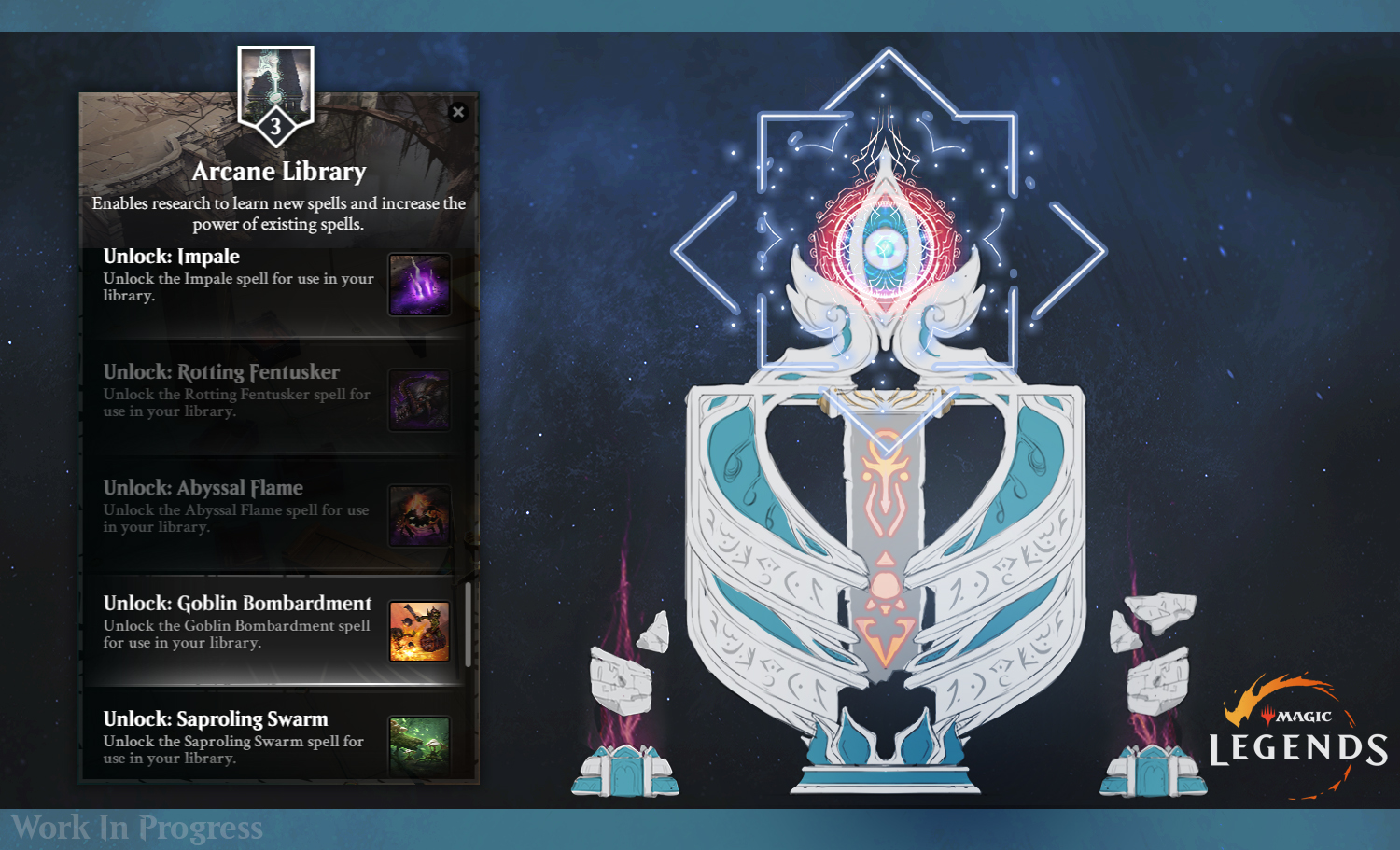 The Artifact Workshop can be used to obtain new Artifacts or improve Artifacts a player already possesses. By completing projects at this workstation, players can accomplish a number of things such as unlocking the six Artifact slots used for loadouts or increasing the rarity of Relic Fragments that drop throughout the Multiverse. Effective use of this workstation will be important for any player looking to maximize the impact of their Artifact loadout. 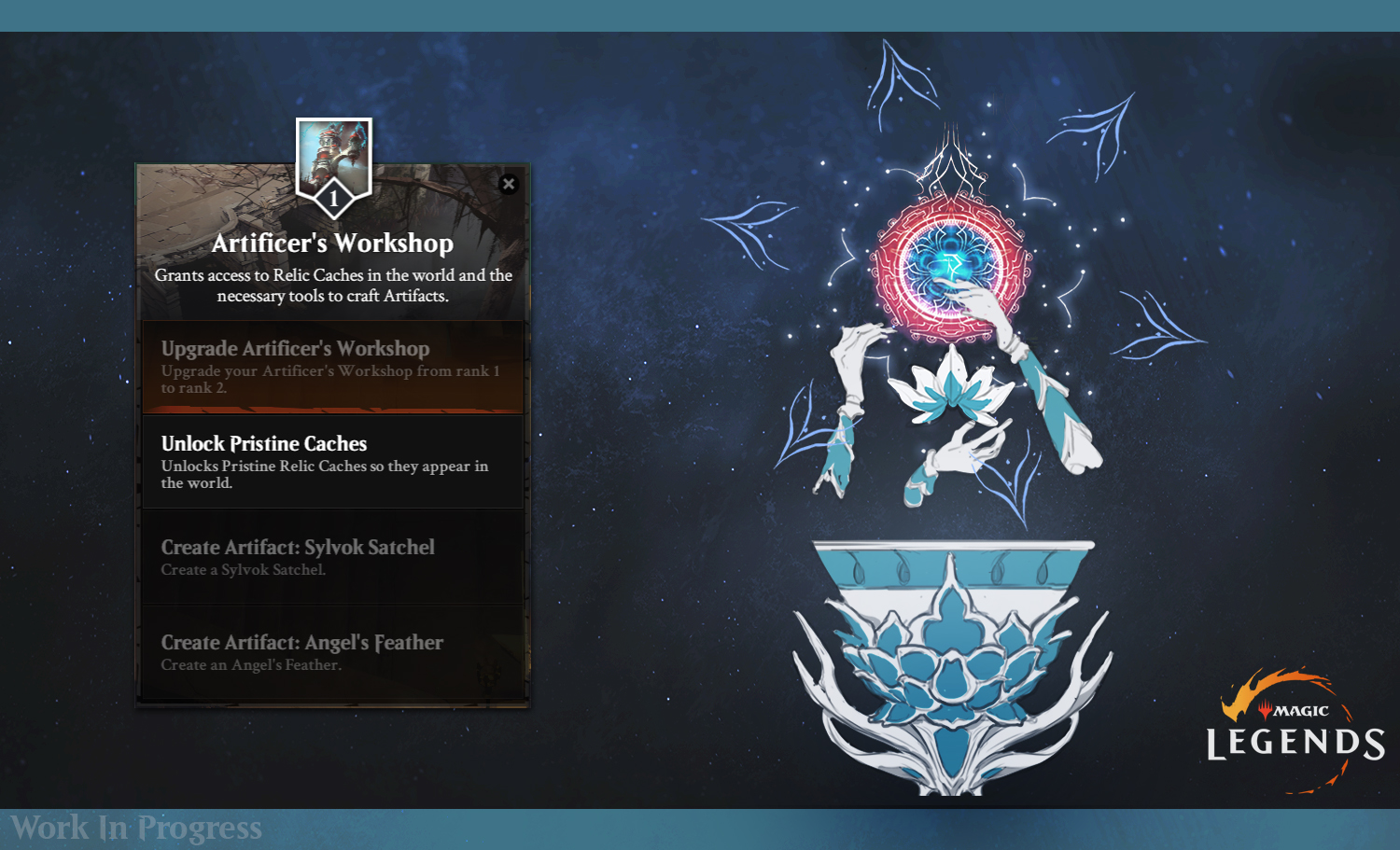 The Cartographer focuses on late game content and advancement. We look forward to sharing more details on this station in the future, so stay tuned.

Realms and the Bigger Picture 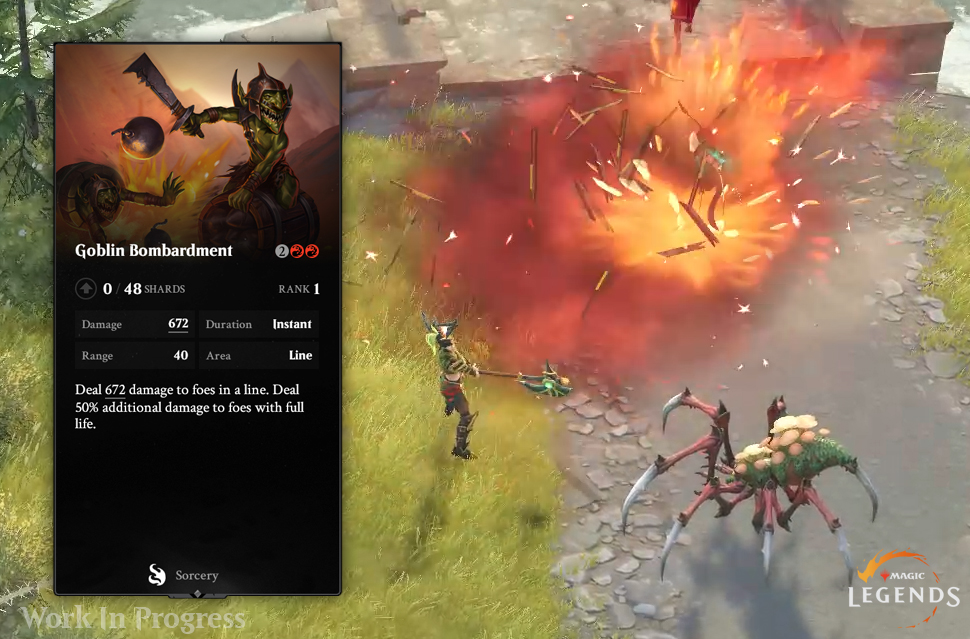 Now that we have revealed how Realms serve as the connective tissue that bring character development and content together, we can explain a bit more about projects. Projects are designed in a way that ensures players are never far from the Planeswalker action. Once a player spends resources on a project and gets it started, they are free to run missions or explore the Multiverse while their projects run towards completion in the background. For example, if a project requires two hours to complete, a player can kick it off and then immediately return to hunting Artifacts and running content with friends. A couple hours later, they can return to their Realm and reap the rewards. Since projects run passively in parallel to the player’s active efforts, an engaged player is constantly rewarded during their journey to become the ultimate Planeswalker.

Details in early development are subject to change, but this is just the beginning for Realms. Our team is already looking into ways to expand their functionality as new content is released. There is also the aforementioned Cartographer workstation, which we will reveal more details on in the future. Make sure to follow us on Twitter and Facebook to stay up-to-date on the latest news and reveals, and join us on our official Discord server to chat with the team and other fans alike! 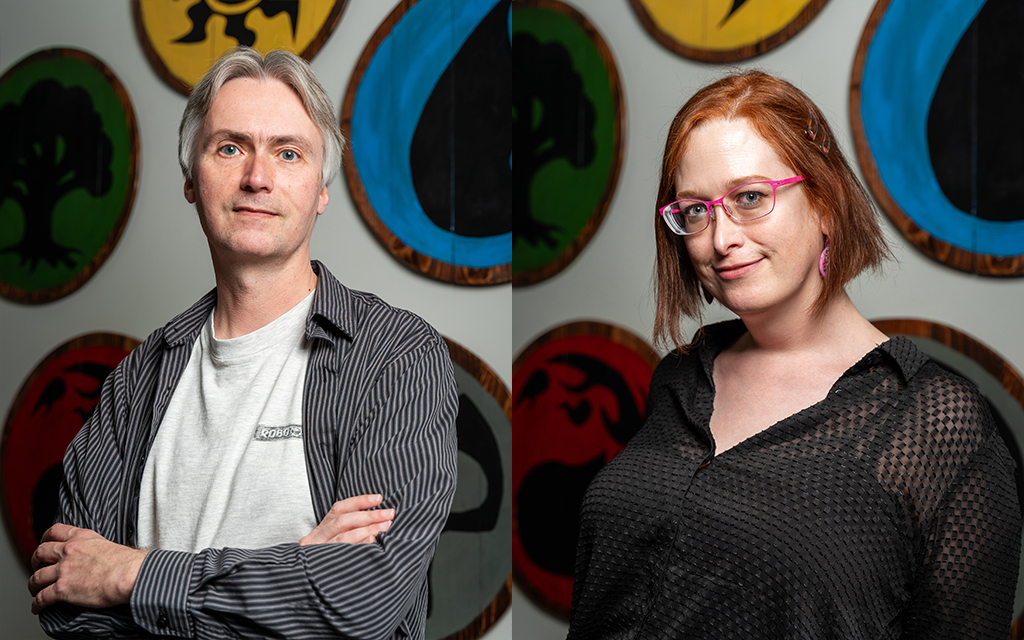